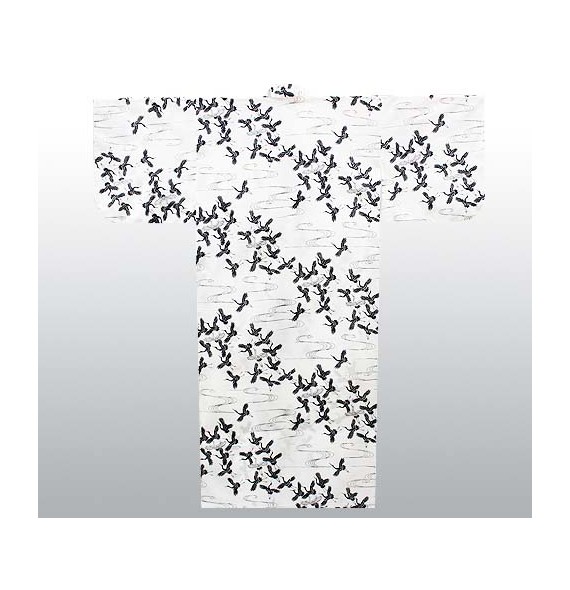 "Yukata" means clothing bath. Originally, this garment was for the " onsen ", the hot baths of japan. Nowadays, it is often worn during festivals or special events. Men and women love to wear this traditional garment to stay at home, or in the summer when it's hot.

This pattern of storks proves the admiration devoted to the nature, by the culture in japan. Observed and powers, she is often depicted on dishes, clothing, or works of art.

Our yukata is supplied with " obi ", the belt that closes the traditional clothing of japan. We offer 3 sizes : S, M and L. This model is unisex.

The Furoshiki is a japanese art designating the packing and decorating gifts or everyday objects in order to offer or carry. The method is to use pieces of tissue, very often of a square shape and fold it or tie it in order to pack the object. Several folding techniques are used in order to adapt to all types of objects. There are different materials : silk, cotton, nylon,... Formerly widely used in Japan, the Furoshiki is making a big comeback, offering a more environmentally friendly and more sympathetic to wrap your gift.
On the shop Made in Japan, you will also find small bags and pouches japanese ultra-resistant hand-crafted by our master craftsmen in japanese. The patterns, colors and materials used in the design of these bags and pouches japanese reflect fully the culture in japan.

In japan, the bento is a item This is not a simple way to carry meals, it is the art and how to provide a balanced meal highlighting the food of playful and sophisticated.
In general the box at bento japanese is divided into different categories : the largest for starchy foods such as rice or pasta, the second for the protein, such as salmon, the third for vegetables and the fourth for dessert.
In Japan, these bento boxes japanese are very used and you can buy compositions of bento from the supermarket very easily. It is also used to make fun food preparation for children presenting them in bento boxes japanese food in an original way, with cutouts in the shape of characters or animals for example.